Thank you for your interest in raising awareness of the issue of ageism in the context of elder abuse. On this page you’ll find resources to help guide your social media activity for WEAAD 2021 and beyond.

We need your help to spread the word through awareness, support, and advocacy activities.

Share our blogs. Use these graphics and sample social media posts as is or adapt for your community, then broadcast them widely using the hashtags #EndAgeismEndAbuse and #WEAAD this June. 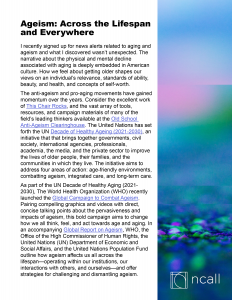 Ageism: Across the Lifespan and Everywhere by Sara Mayer, M.A., NCALL Communications Coordinator 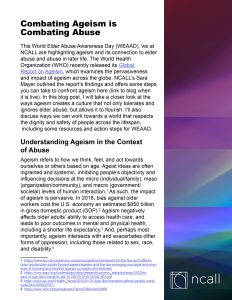 Please use the links beneath the images to access graphics sized for a particular platform. We recommend providing alt text and image descriptions for all images you upload to social media and following guidelines to ensure your posts are accessible to everyone.

For more information about alternative text and other ways to make your social media accessible to all, visit Tips for Using Accessible Social Media.

We’ve created some posts to share in the weeks and days leading up to World Elder Abuse Awareness Day. 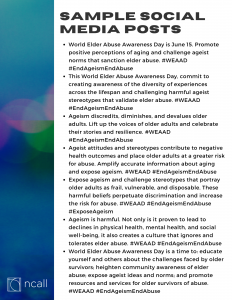 Elder abuse has a profound effect on millions of older adults as well the people who love and care for them. Older victims of domestic violence, sexual assault, stalking, and financial exploitation are being harmed every day. Here are a few ways you can raise awareness of elder abuse and support older survivors on World Elder Abuse Awareness Day and all year long. 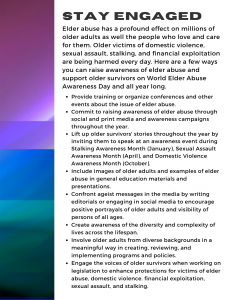